Over the past few months I have been in conversation with Jeanette Calder, the executive director of the Jamaica Accountability Meter Portal (JAMP) and who are interested in promoting citizen engagement and accountability within the Jamaican government.

I hold a similar position at the Public Service Accountability Monitor (PSAM) which is a South African based organization established in 1999 that promotes accountability in the affairs of government, with a primary focus on southern Africa.  We would like to encourage Jamaica to support this new initiative, as we share some of our experience, especially where we have used evidence and findings of the supreme audit institution (SAI) responsible for undertaking independent audits of government.

Between 1999 and 2004 the PSAM tracked 691 allegations of corruption within South African government agencies. Only 72 of the 691 cases (roughly 10%) were finalised with a finding of guilt or innocence or a decision not to proceed due to insufficient evidence. The total amount of money involved for all 691 cases was R6.9 billion. Of this amount, only R325 million (or 5%) was recovered and/or properly accounted for. These indicators and the PSAM’s growing use of the findings and recommendations made by the Auditor-General of South Africa prompted a revision to the approach the PSAM had used to promote more open and accountable government. 1

The PSAM realized that in order to more meaningfully address service delivery challenges, maladministration and corruption within government, we had to focus on strengthening the public resource management system, in ways that would make it more socially accountable and responsive to the needs of the public. We needed to better understand and address the underlying causes that allowed corruption to occur and to advocate for systemic improvements to governance systems. By paying attention to and using SAI analysis, findings and recommendations, we have found that we can better solve governance challenges and strengthen citizen engagement so that governments are more responsive and accountable. 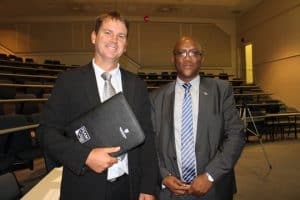 Pictured here is the current head of the South African SAI, Mr Kimi Makwetu and the writer following a public lecture delivered by Mr. Makwetu which the PSAM had arranged in consultation with the SAI.

From 2004, the PSAM began to routinely draw upon the findings of its SAI, which is called the Auditor-General (AG) in South Africa. We would use the SAI’s findings to support more effective engagement with public servants, elected representatives and oversight bodies. In these earlier years, the PSAM set about to educate and encourage journalists and interested parties to better understand and more regularly use SAI results to support their work and engagements. For instance, in 2003 the PSAM issued a press release linking ongoing medical fraud being primarily due to non-implementation of SAI recommendations. The PSAM press release on this issue is available here with an example of media uptake accessible here.

In 2005, the PSAM drew upon SAI results and data to inform a detailed written submission followed by oral evidence before a commission of inquiry into public sector maladministration. The commission subsequently used the PSAM submission and testimony to cross-examine officials and implicated parties. The PSAM submission is accessible here.

In 2007 the PSAM drew upon SAI material to call for disciplinary and criminal charges against certain heads of departments of government entities. The PSAM issued a press release entitled “Taking the Auditor-General more seriously” which received widespread coverage and resulted in a national radio debate with the head of the SAI and numerous other radio interviews and television coverage. Not only did these engagements result in action by Parliament against implicated parties but it also promoted public knowledge and debate whilst improving the public’s understanding of the SAI’s vital  role.

Another example of how the PSAM has used SAI results for advocacy purposes is explained as follows: In August 2007 South African President, Thabo Mbeki released a statement: “Anyone who may have evidence which demonstrates that any minister or deputy minister has acted in dereliction of duty is welcome to forward such evidence to the presidency”.  The PSAM responded with a press release entitled “Here is the evidence” which drew on SAI results and detailed why the then Health Minister should be removed from office by the then President. The press release received widespread media coverage.

Research during these earlier years by the PSAM, which drew upon SAI results revealed, amongst others:

The PSAM has witnessed how the South African SAI has taken steps over the past decade to make its audit reports more easily accessible and better understood by the public. This has included improvements to the SAI’s website and to the visuals, data and the formats used in their reports to make content accessible to a wide audience of potential users. Staff of the SAI also set aside time to engage with the public through radio interviews, panel discussions and other forms of public engagement that promote education and greater understanding and access to the SAI’s work.

Sustained multi-faceted auditing by the SAI, whose reports are used by civil society to advocate for improved governance, alongside  parliamentary oversight and political leadership, have resulted in certain improvements to the audit outcomes of government departments in South Africa. We have however witnessed that improved audit results are not always sustained as it requires routine consequence management and the retention of public servants and members of the executive that are committed to bringing about improved service delivery. Political instability and conduct that serves private interests at the cost of the public can erode gains made, especially where parliament, the executive and law enforcement agencies  do not investigate or act meaningfully upon findings made by the SAI.

For these and other reasons, it is critical that civil society, media, parliaments and the public more broadly pay regular attention to the work of the SAI and support calls for corrective action where that office makes adverse findings.

We look forward to supporting and collaborating with the Jamaica Accountability Meter Portal (JAMP) as they embark upon critical work to support their SAI and citizen engagement in Jamaica.